The Healing Intelligence of Essential Oils 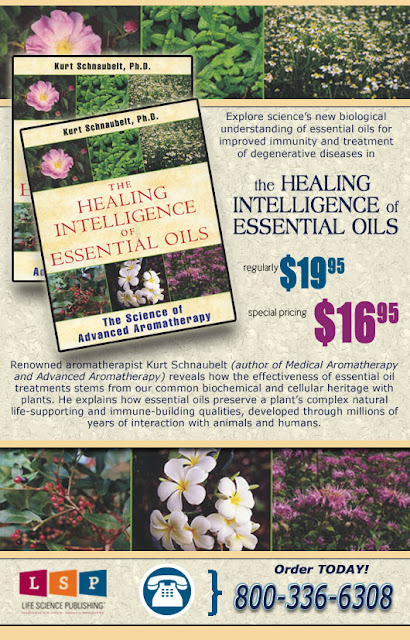 Oh, I want this this book!!  I read Kurt Schnaubelt's book, Advanced Aromatherapy, and really enjoyed it.  Now Life Science Publishing has just come out with this new book with special pricing.  I love the title of it - The Healing Intelligence of Essential Oils - because I really do believe that essential oils have an intelligence, and that they follow the intent of the person putting them on.  That's far out stuff, I know, but if you study quantum physics, you find that electromagnetic energy behaves as a wave or as a particle, depending on the intent of the observer, as discovered in the 1980's by scientists working independently in Germany and the United States in the "Double Slit, Delayed Choice" experiments.1  David Stewart says, "We know that essential oils amplify intent--the intent of the person applying the oils as well as the intent of the person receiving the oils."2  He also says, "Chemistry determines what is possible.  Quantum physics determines which possibilities actually happen.  Our thoughts won't change the chemistry of an oil; that is fixed before we apply the oil.  But our thoughts can determine which aspects of the chemistry will work in our bodies; that is determined at the time of anointing and afterwards."3 In addition, I believe the intelligence comes from the bestowal of life by an all-wise Creator.  Essential oils are "alive," in sharp contrast to synthetic pharmaceutical drugs.

In all the reading I've been doing, it is really interesting to see the merging of right-brained energy workers with left-brained physicists when it gets down to the level of quantum physics, where they have common ground.

In her book Molecules of Emotion, Candace Pert puts it this way, "I often find myself addressing very mixed audiences.  Depending on the nature of my host's organization, the crowd is either weighted toward mainstream professional--doctors, nurses, and scientific researchers--or toward alternative practitioners- chiropractors, energy healers, massage therapists, and other curious participants--but frequently includes members from both camps in a blend that can best be described as the Establishment meets the New Paradigm."  She describes the clothes too, which I thought so descriptive, "When I...glance around at one of these mixed crowds, I notice first that, in marked contrast to the more scientific gatherings, there are usually large numbers of women present.  It still surprises me to see so many of them, dressed beautifully in their flowing California-style robes of many colors.  I am always stunned by the many shades of purple in their dress, more shades than I ever knew existed!"  And then she describes the doctors, "The men sit erect in their well-tailored dark suits and crisp white shirts, while nearby their female counterparts look officiously around, checking the room for the faces of their colleagues."4  Personally, I think I would be comfortable in both camps, although I might prefer the more comfortable flowing robes.  :)

Flowing purple robes are a marked contrast to well-tailored dark suits, and yet they come to hear the latest on the same thing - quantum physics - which is where the answers lie for how essential oils can have "intelligence" and work according to a person's intent.  And this leads me back to the fact that I am very excited to get my hands on this book!

P.S.  For a detailed and easily understood discussion of quantum physics and related topics, see  Transcendental Physics, by Edward R. Close available at www.iUniverse.com or by calling EJC Publications at 877-756-6753.  For how Quantum Physics relates to essential oils, Dr. David Stewart published a small 20 page pamphlet.  It is listed in the footnotes, but it can also be found published online here.  I highly recommend this essay by Dr. Stewart - it's fascinating, and will change your way of thinking when you put on an essential oil!

Lorena Holmstead, CHBP, CRTS, LSH
My husband and I have six children, four that are married, with three grandchildren. We live on a 37 acre farm in semi-rural Idaho, and we own Thunder Creek Llamas, a llama rental business. My faith in Jesus Christ is central to whom I am, and as a family, we are so grateful to belong to the Church of Jesus Christ of Latter-day Saints. The roles of wife, mother and grandmother bring me great joy! I have a BS from Brigham Young University in Pre-Physicial Therapy. I have been using alternative healthcare for almost 30 years. I use products from Young Living Essential Oils, Nature's Sunshine Products and Renova Worldiwde. I am a Certified Healer's Blueprint Practitioner, a Certified Raindrop Technique Specialist, and own Lightfeet Zoning, a program for Foot Zoning. I am currently studying to become a Traditional Naturopath through the International Institute of Wellness and Education. ¡Yo hablo español!